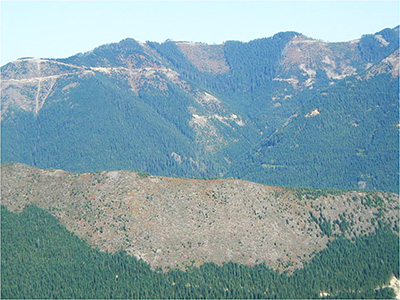 Industrial clear-cut logging produced a much different result from natural disturbances Few living or dead trees typically remained. Even when areas were selectively logged and live trees were left, the residual trees often were burned up in the many slash fires that characterized logging operations in the early twentieth century. Such fires were typically caused by sparks from railroad engines.

The resulting regenerating forests were relatively uniform, with trees of similar size and often a single species, typically Douglas-fir at lower elevations. Such tree plantations have been shown to be biologically poor when compared to naturally regenerated forests.