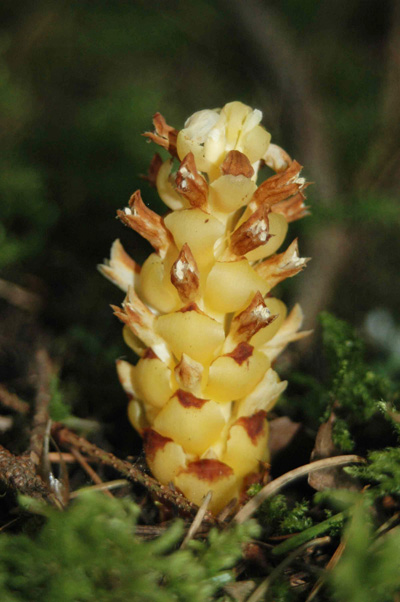 Twenty people joined the walk led by board president and ecologist Jim Erckmann. We kicked off the walk in the parking lot talking about invasive plants and how volunteers are needed to control them in urban parks, and we saw the plant that was the inspiration for Velcro. We reviewed the history of the park, then talked about the main trees in the park and some of their characteristics, and identified many of the plants along the trail. We learned that Trillium and Bleeding Heart seeds are dispersed by ants and that ants sometimes tend aphids, protecting them in return for excreted sugar. We discussed why epiphytes are much more commons on maples and alders than conifers, and why conifer forests dominate in our region in comparison to New England’s hardwood forests.

We talked about the value of standing, dead trees (snags) to wildlife and saw some woodpeckers in action on a few of them. We ended up at flowers of the rare Vancouver Ground-cone (photo to right), a plant that has no green leaves and is parasitic on Salal - sometimes via an underground “mycorrhizal” fungus. We talked about the importance of such fungi to plants, with 92% of families and 80% of vascular plant species dependent on them.