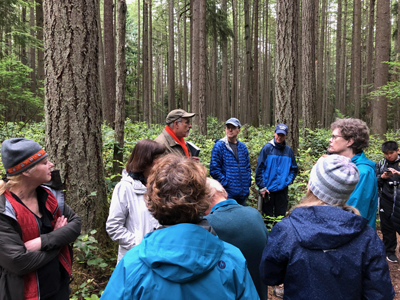 Despite the overcast and rain late in the morning, a hardy group of participants persevered with botanist Clay Antieau to learn about plants in the park. To start the walk, the group visited two species of rare and interesting plants that were in bloom. The flower of Vancouver ground cone looks like a fir cone sitting upright, and coralroot is a lovely little orchid. Both are mycoheterotrophs, plants that lack leaves and chlorophyll but rather get nutrients visa underground fungi that in turn get nutrients from other plants. Complicated! We learned that only 400 of the 391,000 known species higher plants species worldwide adopt this unusual way of making a living, and we have four of those species in the park.

We also learned about several plants that were wildcrafted: Pacific yew, for its cancer-fighting chemical Taxol, and cascara, for its laxative properties. Note: don’t eat cascara by accident!  All in all, a fascinating morning for all, as Clay shared his impressive knowledge about all things plant. See our 2019 events schedule for other nature walks this summer and fall, focused on plants, forest ecology, and mushrooms.